On a mission to prevent obesity, Walmart has announced that they will be pulling some processed foods from their shelves, sources have confirmed.

According to the Center for Disease Control’s website, 2016 numbers showed that 39.8% of American adults (93.3 million) are obese.* 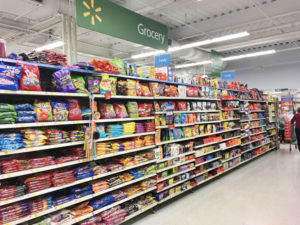 Some shocking reports suggest that some obese Americans are getting junk food from Walmart, the #1 retail chain in the country that raked in over half a trillion dollars last year.

“The status quo has got to go. We can’t sit back and do nothing about something that kills half a million Americans per year,” a spokesperson said.  “We could potentially be killing our customers with every bag of chips, candy bar, and soda we sell.  We are saying enough is enough.”

When pressed about which processed foods would be removed, the spokesperson explained, “We don’t want to alienate our customers, so we will continue to sell larger snacks.  The only junk food we will be removing will be the smaller, bite size candies.”

When asked if Walmart would stop selling alcohol in an effort to prevent drunk driving, we were refused comment.