Unconscionable, asinine, senseless… these are words that come to mind when you read about this story..but a little background story first.

Brookhaven, Mississippi has had an exceedingly tough last week. Last Saturday morning, two officers were gunned down in the line of duty. Patrolman James White and Corporal Zach Moak walked into the valley, they feared no evil, and they lost their lives as heroes. Hundreds of police came to their funerals as an entire community came together with the families to mourn. Their processions were miles long. Thousands stood along the streets waving American flags with hands over heart. The displays of unity in the community were heartwarming and comforting. This is a community that stands tall when tragedy strikes.

As with many small towns that dot the map that makes up these United States, Friday night is something to look forward to for many towns. Friday Night Football would have been a great reprieve from this difficult week, but the citizens of Brookhaven were met with a different mode of terror. 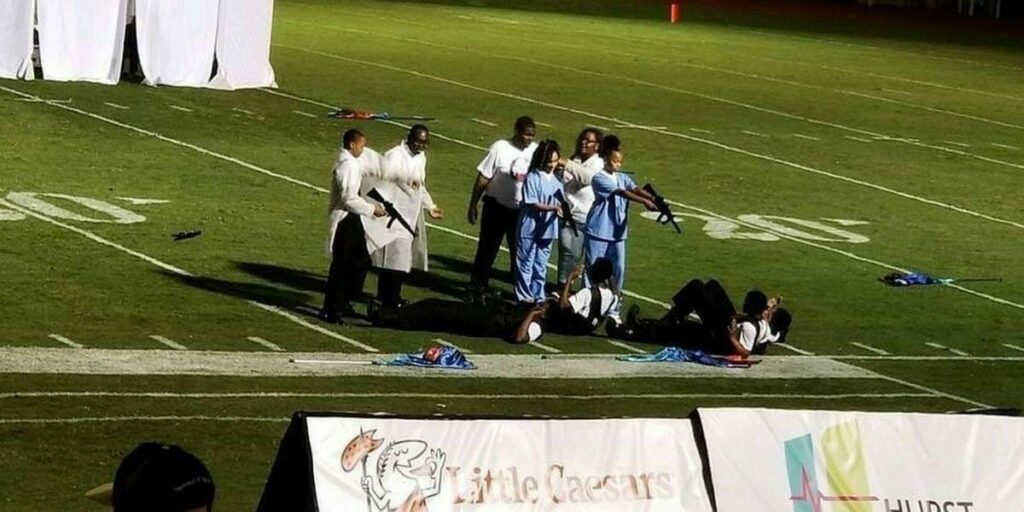 Friday night at Brookhaven High School, the Panthers were battling the Forest Hill Patriots, a Jackson area high school. During the half time show, Forest Hill band students performed what was described as a performance loosely based on the movie John Q. The show features the scene pictured above, with students dressed as doctors and nurses pointing toy guns at others students dressed as police officers.

To put it short, the hometown crowd was a little less than enthused! As the scene was carried out moans of shock and horror rang through the crowd, no doubt followed by booing at the senseless display being played out before them.

Many questions come to mind when you try to ‘wrap your head’ around how anyone could ever think that this was remotely appropriate. Had this been performed before last night? There were major failures in the decision making that went into this half time performance of a high school band. In my 30 plus years of life watching high school football games as well as participating in high school and junior college band myself, I have never seen or heard of a band taking that much ‘theatric license’ the likes of which this already traumatized town was exposed to Friday night. Students, mind you, were holding and play shooting very real looking guns, at other students dressed as police officers, on a high school football field. This isn’t the drama department, this isn’t art, this was high school marching band performance. In this day and age, where officers across the country are at a greater risk than ever arguably, the kind of message that was being sent in that display is not hard to read. We could make assumptions about this scene and the overt message that it sends, however this writer will leave that to you, the reader.

The important thing to note here is that the students, although they performed the scene, they likely did not plan it out. Even so, adults were responsible for putting together this half time show and approval of said show.

Thankfully, the resulting outrage that was triggered Friday night as already had an impact. Posts on social media about the event went viral, with one post being shared over 900 times. Local and State elected representatives took action immediately and thoroughly. A myriad of phone calls and emails were sent by citizens and officials alike. Apologies have been extended from Jackson Mayor Chokwe Lumumba and Jackson Public Schools Superintendent Dr. Errick L. Greene. As of Saturday evening, Jackson Public Schools had put the Band Director of Forest Hill High School on administrative leave pending an internal investigation. There may be some action taken against other adults or even students who may have been involved in the decision making process or for the use of very realistic toy guns when use of such toys are highly prohibited on school campuses. However, the response and remorse expressed by leaders shows that common sense still reigns in Jackson.

Despite this lapse of judgement on the part of the Forest Hill High band, Brookhaven still stands strong. Rest In Peace Patrolman James White and Corporal Zach Moak, your heroic sacrifice shall not be forgotten.